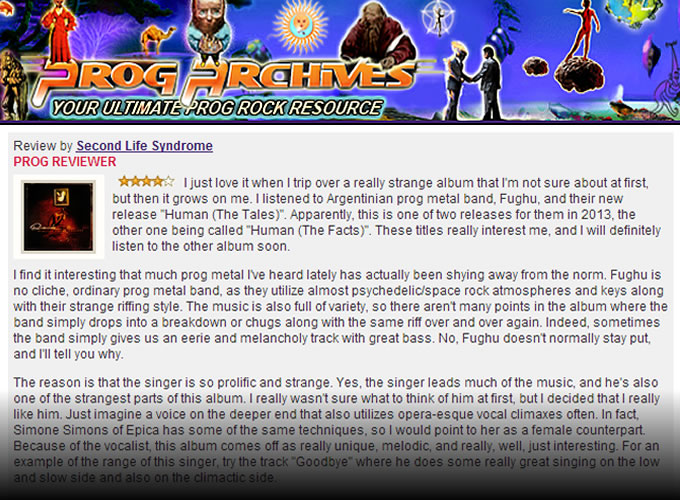 I just love it when I trip over a really strange album that I’m not sure about at first, but then it grows on me. I listened to Argentinian prog metal band, Fughu, and their new release “Human (The Tales)”. Apparently, this is one of two releases for them in 2013, the other one being called “Human (The Facts)”. These titles really interest me, and I will definitely listen to the other album soon.

I find it interesting that much prog metal I’ve heard lately has actually been shying away from the norm. Fughu is no cliche, ordinary prog metal band, as they utilize almost psychedelic/space rock atmospheres and keys along with their strange riffing style. The music is also full of variety, so there aren’t many points in the album where the band simply drops into a breakdown or chugs along with the same riff over and over again. Indeed, sometimes the band simply gives us an eerie and melancholy track with great bass. No, Fughu doesn’t normally stay put, and I’ll tell you why.

The reason is that the singer is so prolific and strange. Yes, the singer leads much of the music, and he’s also one of the strangest parts of this album. I really wasn’t sure what to think of him at first, but I decided that I really like him. Just imagine a voice on the deeper end that also utilizes opera-esque vocal climaxes often. In fact, Simone Simons of Epica has some of the same techniques, so I would point to her as a female counterpart. Because of the vocalist, this album comes off as really unique, melodic, and really, well, just interesting. For an example of the range of this singer, try the track “Goodbye” where he does some really great singing on the low and slow side and also on the climactic side.

The album seems to deal with human problems, depression, and universal questions of worth and meaning. I want to look into the lyrics a little more, but this album is solid to be sure.