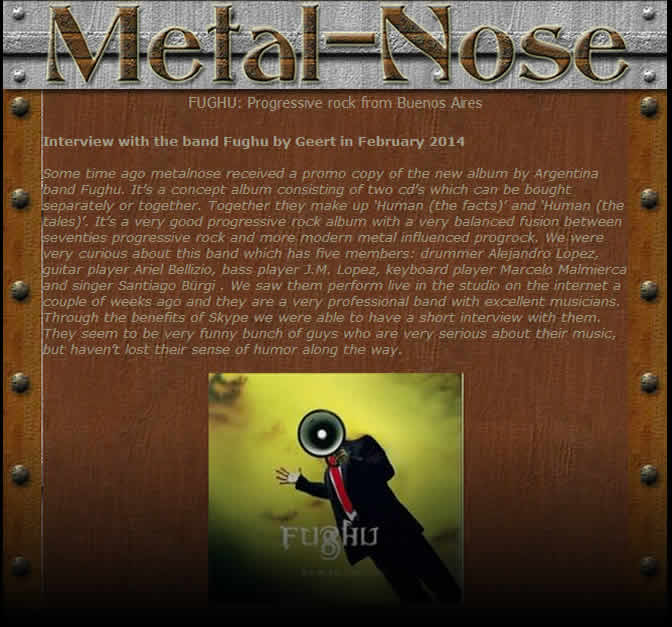 We saw them perform live in the studio on the internet a couple of weeks ago and they are a very professional band with excellent musicians. Through the benefits of Skype we were able to have a short interview with them. They seem to be very funny bunch of guys who are very serious about their music, but haven’t lost their sense of humor along the way.

First tell us the short history of the band

‘The band made a start in the year 2000 with Ariel and Alejandro, but the current line-up got together in 2007. We started rehearsing and writing music and went into the studio to record our first album. It was released as ‘Absence’ in 2009.’

You just released a second album ‘Human’, which is a concept album. What is the story behind it?

‘When we started to compose the album, we had more than a hundred demos by different members of the band. Each of us has his own influences and writes different kinds of stuff. We are open to each other’s ideas and we are very open to develop these different ideas into a song.

We had so much more music than can be burnt into a CD, so we had to make choices about what songs to use. That was a huge task! We choose to make a classic concept album and we present the different characters on ‘Human (The Facts)’ and on ‘Human (The Tales)’ we build satellites around it, so to speak. The songs on the album all stand on their own, but they also go together very well.’

You have some well known musicians like Jeff Kollman and Damian Wilson as guests on the album. How did they end up working with you guys?

‘Blackmail!!! (laughter). Ariel did have contact with Jeff Kollman on Facebook and told him about the album we were recording. Jeff was very open to collaborate and when he did hear a song he was immediately prepared to work with us and he wrote a great guitar solo.

The first idea was to let him do a kind of duel with the keyboard player, but his solo was so great that we decided to keep it the way it was. As for Damien Wilson, we know someone who worked with him and who was trying to get us some concerts at European festivals.

We asked that person to contact Damien and ask him if he would be prepared to do something with us. He showed interest, but after we send some material to Damien, we didn’t hear from him for a long time. In fact we had already given up hope when he contacted us again with a message that he liked our music very much and that he would gladly work with us.

When he finally recorded his part, it turned out great. Santiago was very happy about that as he is a very big fan of Damien.’

The singer of Fughu, Santiago Bürgi has a very good voice and sings almost like a classical singer. Is he a trained musician?

‘Yes, he is a very busy musician touring the world. He sang in China and Austria and does classical opera’s here in Argentina. He’s a professional, but first of all he’s a rock singer. He’s really a very funny guy with a rough attitude.

He’s a rock star! In the opera he acts like Ronnie James Dio (laughter). We also have another opera singer as a guest on the album. He’s called Dario Schmunck and he stays a lot in Germany and Austria. By the way, there’s another guest who is a very good friend of us called GEA and he’s playing the didgeridoo on one track, even in a live situation.’

Do you do a lot of live shows?

‘Well, last year we did a couple of shows in our area and this year we hope to do more shows all over the country. In the past we did a lot of acoustic shows, but the new album requires a big production and preparation. We will also need venues that are big enough to handle the stage production.

We only played once outside of Argentina, but we are trying to set up something for Europe and Japan right now. It’s not an easy thing to do, because the traveling is very expensive. As an independent band, it is not simple because to make it work, we have to find enough places to play.

We have been invited by ProgPower in Europe, but that was just for one gig and that is not possible for us.’

Did you get some good response from Europe about the CD?

‘Yes we did and it was all great, except for one review in a prog magazine by the way (laughter). The guy compared Santiago’s voice with Fish (laughter)!!!

It was like he never heard the album (laughter). Overall, everybody was positive, not only in Europe, but also in Japan. We have a distribution deal for Europe and also for the United States, but in Russia, it’s all illegal! (laughter). It’s also easy to order with CDBaby in America.’

It surely is, I personally ordered the first album ‘Absence’ with CdBaby and everything went smooth. It’s a great album by the way!