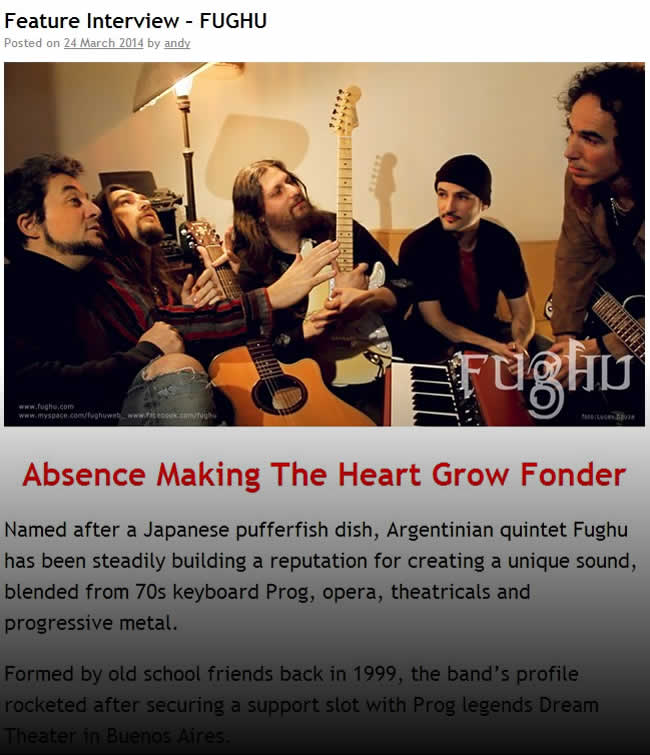 Named after a Japanese pufferfish dish, Argentinian quintet Fughu has been steadily building a reputation for creating a unique sound, blended from 70s keyboard Prog, opera, theatricals and progressive metal.

Formed by old school friends back in 1999, the band’s profile rocketed after securing a support slot with Prog legends Dream Theater in Buenos Aires.

Now, with three excellent albums to their name, DPRP catches up with guitarist Ariel Bellizio, to find out about Damian Wilson, Mike Portnoy, opera singers and the growing demand for Fughu Pantys.Andy Read asks the questions.

Fughu was formed back in 1999. How did you all meet and begin playing together?

It was at a school function in 1997. Before going on stage I was introduced to Alejandro López. I asked if he knew a few songs from Megadeth, Metallica and Deep Purple so that we could do a medley. He accepted without problems.

At that time I had a band but I knew that he was the drummer I wanted for my next project. However he had his projects as well, so our agendas didn’t match. A while later we met again at a birthday. He told me he was no longer in a project, so I suggested we start a band called Sector 7G (that is the sector where Homer Simpson works).

In 2000 we changed the name to Fughu (Japanese Blowfish). We recorded several demos with different members, but in 2005 Marcelo joined in the band, and we entered his studio, EstudiosGong, to record the album. At the end of 2007, Santiago Burgi joined the band, and the album was finished. Fughu has had the same members since then.

The profile of Fughu became much bigger in March 2008 when you were Dream Theater’s opening act during their tour in Argentina. How did you get the gig? Did it go well? What memories do you have of the concert? Did you get any reaction from, or did you meet Dream Theater?

When Dream Theater began their Latin American tour for Chaos In Motion, Mike Portnoy wanted to select a band for each country to open their show. They were doing a long three hour show, so they wanted an opening act to shorten their act, and give an unknown band a golden opportunity. We sent our material and were selected from over 500 bands. The show was amazing and Dream Theater and their staff were very friendly to us. They even came to our dressing room to wish us luck and to chat for a while. At all times we were treated as colleagues, as equals. It was incredible to see Mike in the backstage, head banging whilst we performed. Very cool!

It took over ten years for you to release your first album, Absence. Why such a long time?

When Marcelo joined the band in 2005 things were taken more seriously and professionally. Marcelo owned a recording studio named EstudiosGong which made it easier to record the album. Absence was finished in 2007 but due to a change of singer we didn´t release it. We didn’t want an album with vocals  that were no longer in the band. So we delayed everything until thank God, Santiago appeared. He finished all the vocals, putting his own attitude. It took a little more time to finally publish it, because we also mixed the whole album ourselves.

Your newest release, Human, is spread over two different albums. Can you explain the story that each album tells?

Human – The Facts has eight songs. They tell the story of a man who reached the top but who now is old and has lost his power. He has to take some tough decisions about how to move on: “One tree is falling, one grows near”.

The story is about four characters. Mr. Climb, performed by Santiago. He is the lord and master, but his time is running out. Tloth is performed by Damian Wilson, the successor who is willing to crush Climb´s head if necessary. That’s what he learnt from his master Mr. Climb. Meanwhile Otto Climb is performed by Dario Schmunck. He is Mr. Climb´s father, who reproaches him for his sins in his darkest nightmares. And The People, represented by the chorus, is a prejudiced and intolerant mob.

Human – The Tales has seven songs, telling seven different aspects of the human being. From sex, ambition and madness, to love.

Fughu’s music always seems to take influences from many places. However, in the case of the two new albums, each CD also has a very different style and mood. The Facts is more coherent and accessible. The Tales is more complex and theatrical. Was it intentional to, in effect, create two very different albums musically or did it just happen that way?

Unlike Absence, these two albums were created and produced with a very clear idea. WithHuman: The Facts, we wanted to achieve a very dark and theatrical concept album, with the challenge of composing music according to what the story was going to need.

With Human: The Tales  we had the idea of a more rock-orientated and colorful album, with a wider range and with many risks but also with a little more light ….but not much! This album was the last we recorded and Till the Day I Die was the last song we wrote. We even wanted the albums to be recorded and mixed completely different to each other.

Many bands have made concept albums spread over two CDs. However they are always sold as one. With Human you have produced two separate discs and sold them separately. I am interested in the thinking to do it this way. Surely that makes it more expensive for people to buy, and thus more difficult to sell?

The albums can be bought individually, or you can get the special edition with the two albums plus a great booklet with cool photos and all the lyrics. Nowdays, the album is considered merchandise, so we wanted a cool edition that makes you wanna buy them all. You have to compete against the downloads anyway you can!

I hear that when you play these songs live it is a very theatrical show. Can you try to describe Fughu live?

It’s hard to describe Fughu live shows, because they are always different and there’s a lot of production but also with a lot of free jamming and feedback with the fans. We are lucky to have Santiago, who is a professional opera singer, because he knows how to move, act and seize the stage. Marcelo is also an actor, so we find it very easy and fun to create theatrical moments and atmospheres.

Right now, we are presenting both albums and the show is divided into two acts. In the first part we play Human: The Facts completely. Santiago plays three characters and sings in different stage voices. The rest of the band perform the enraged People part of the story.
While we prepare for the second part of the show, we project some funny videos and quizzes about the band, just to change the mood. We return with a much more rock attitude to play songs ofAbsence and Human: The Tales.

What is the progressive music scene like in Argentina? Is Fughu a big name? Is it possible for Fughu to get gigs and sell music? What other Argentinian bands should people listen to?

Argentina is a country where most people listen to other kinds of music … and mostly in Spanish. But there are always crazy people wanting to find something different. Within the Progressive Metal scene in Argentina, we are one of the most renowned bands. Our musical friends don’t belong to the Heavy Progressive world but they are excellent! For example Cronogramas en Phantomas andGEA are great bands. We also like Mindslave and Contramarea, two other great Progressive bands.
Our shows are totally produced by us, we are lucky to have a group of followers. So, after the shows we sell much merchandise like shirts, hats, mugs, Fughu Pantys, albums and so on.

ou seem to do everything yourself as a band. How easy has it been to get Fughu known outside of Argentina. What things have you done to promote Fughu overseas?

Working without a label is not a choice, it is something that just happened. To keep on moving, you have got to learn to do everything on your own. Although we like it and it gives us a lot of freedom, it is exhausting sometimes. Luckily we discovered how to develop good team work, dividing tasks and sometimes we even work like a company, you know, as an office to get interviews, reviews, etc… Thanks to social networks we get in touch with people from abroad and thanks to people like you, we´ve found places to publish what we do. Thank to you, by the way.

If you could pick three songs from Fughu to take with you on a desert island which would they be and why?

Can I choose three girls instead? It would be more fun!

Let me think … I will choose a song from each album. From Absence, I choose Storm because it was the first song I wrote with Alejandro. Until it was recorded, it had many changes but it is a song that has it all.

From Human: The Tales, I choose Mayhem. I love the mystique of that song and every time I hear Jeff Kollman´s solo, it gets better and better.

From Human: The Facts, I choose Quirk of Fate because it really moves me and also The Facts because it has a fantastic closure, very powerful. Come on, let me  take four songs!

I saw fellow Argentinian band Sacrum play at ProgPower Europe a few years ago. Will it ever be possible for you to come over to Europe to perform your music?

We shared the stage several times with Sacrum, they are very nice guys. We´d love to go to European festivals! We hope soon to be able to travel to play and show Fughu´s venom live! It is something that is in our plans.

The track Quirk Of Fate features Damian Wilson. He is not a native of Argentina! How did you get him involved?

We were working with Justin Hulford from On The Rail Promotions and within his contacts was Damian Wilson. So we asked if it would be possible to contact him to record a song. We did and he asked us to send the song. Damian said that he liked it and that he felt happy singing it. So we asked him to record it and send us the vocal track. It was an honor for us to have Damian Wilson in the album. We’re big fans.

Can you all make a living yet from music? If not what are your “day jobs”?

Santiago works as an opera singer. Marcelo designs equipment for synthesizers and also makes hand-made pre-amps for his own brand “Volt”, which is the equipment we use to record with Fughu. Alejandro works as a video editor. Juanma is school teacher and I sell machines and tools.

Finally I’m intrigued to know why your keyboard player Marcelo is called The Salmon?

Ha! We always say that the universe will explode when Alejandro and Marcelo agree on any opinion. Marcelo is a salmon swimming against the current. A pretty crazy guy who always has a different opinion but no less valid! I learnt a lot from him and it´s great to trust a person like that with my songs because you never know what will return. Whenever you think that’s going to go in one way, it ends up going to another.