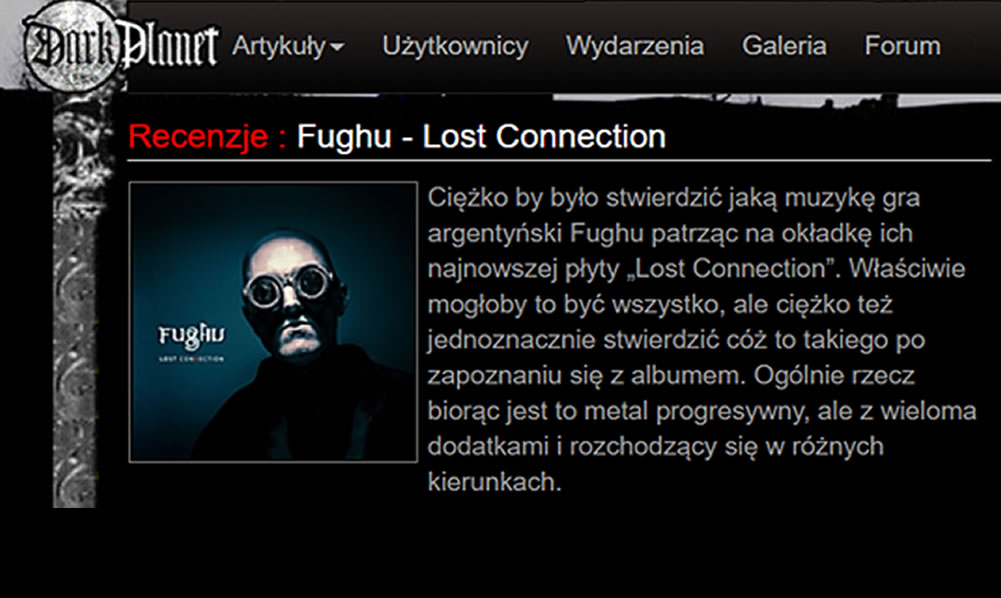 It would be hard to tell what music the Argentinian Fughu plays by looking at the cover of their latest album “Lost Connection”. In fact, it could be anything, but it’s also hard to clearly say what it is after reading the album. Generally speaking, it is a progressive metal, but with many additives and spreading in different directions.

There is also a lot of grotesque in it. The vocal is like a puppet theater, especially in such “Right From The Bone” and “Call Now!”, Where its caricaturality goes hand in hand with the abstractness of the text and instrumental confusion. “Pixel Hero” is a more emotional and sung high-flying song, which slowly gets going, spiced up with electronics, and finally resonates with stardust. “Stay”, on the other hand, is a jazz track that turns out to be a Dream Theater-style ballad with lots of piano. Something for fans of the band’s lighter face, but a cool song with its own identity. It is similar in “What If” and in “Martian”, but this time more in the style of Anathema. Anyway, this veiled delicacy is a hallmark of Fugh and appears in the next “The Goat”, this time accompanied by heavy bass, or later in “Told You” and the last “Vexed Flower”.

And underneath all of this, a lot of effects, electronic layer and keys, although not in amounts covering the main plot. Everything happens rather calmly and sedately, but with a pinch of power and emerging melodic lines. There is also this twisted playing of instruments, because it’s progressive metal after all. An interesting item, after a few times it starts to stick together into coherent wholes, and it’s exotic for us. So if someone likes such music, he can look for it.